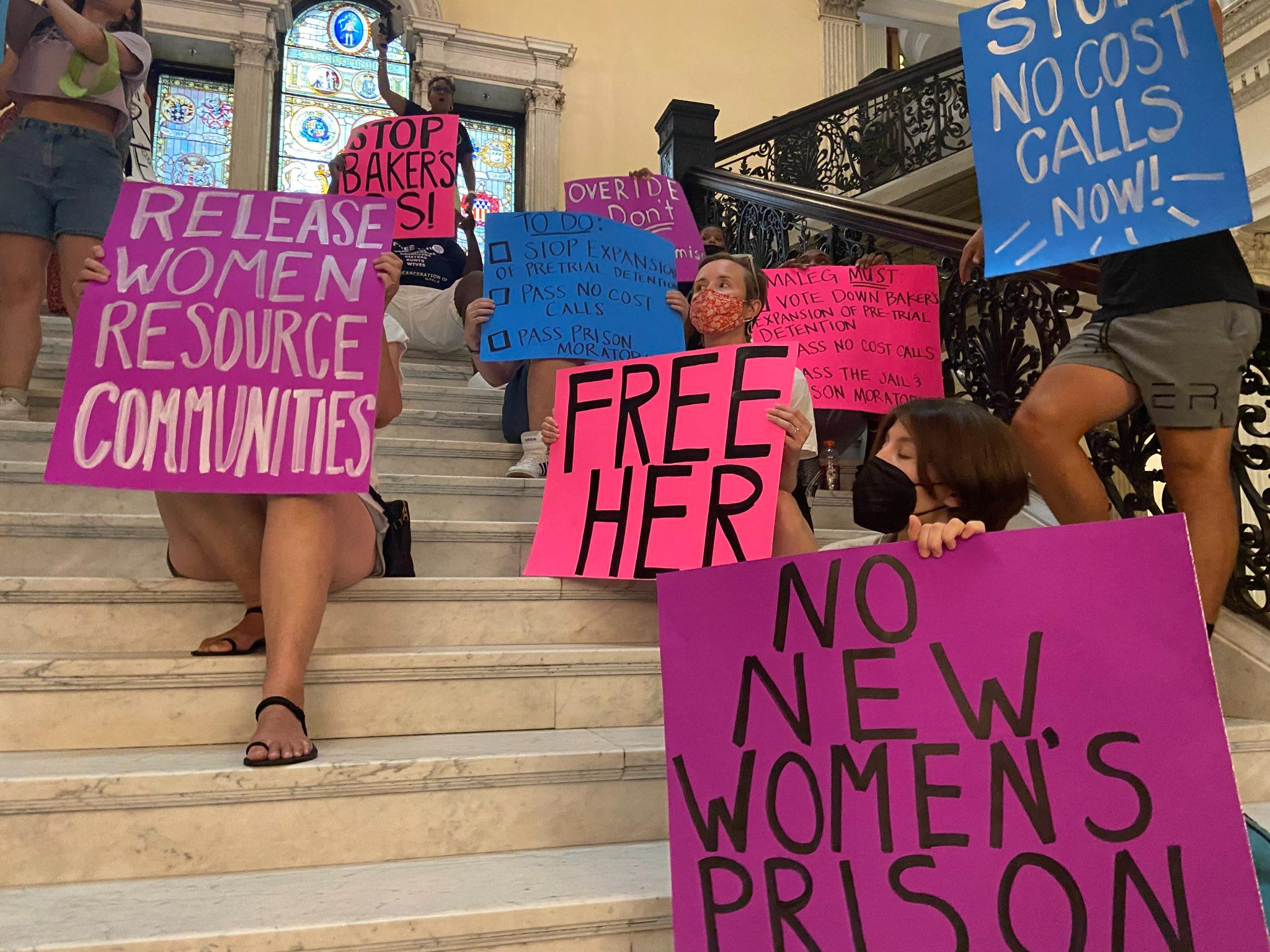 A June report commissioned by the Massachusetts Department of Corrections and produced by consulting firm The Ripples Group promotes ‘prison nurseries’ as a feature of so-called rehabilitative practices that Massachusetts should adopt over the next 50 years. The  $250,000 report is being flagged by lawmakers, advocates, and independent researchers as illegitimate and full of errors.

Titled ‘strategic plan for women who are incarcerated in Massachusetts,’ The Ripples Report is billed as an independent third party document, but it fails to consider any viable options that do not also expand the prison industry. Instead, it suggests that the ongoing harms of women through imprisonment can be lessened via things like ‘the European Model’ and ‘trauma-informed’ frameworks.

This Thursday evening, Governor Charlie Baker officially disproved language that would have put a five-year pause on prison & jail construction within the general infrastructure bond bill. Included in his letter to the legislature was the following: “The Department has a number of critical initiatives pending … perhaps most importantly, a strategic facility plan to reimagine a rehabilitation center for women based on the best gender-responsive practices at MCI-Framingham.” With the moratorium bill language excised from the infrastructure bill, features of the erroneous Ripples report may now come into being as part of the plan to replace MCI-Framingham. Organizers who’ve opposed moves to replace or renovate the facility for years insist that there is no such thing as a gender-responsive prison, and that women are often incarcerated in the first place for being victims of gendered abuse.

As such, advocates and directly impacted people pushed back against the Ripples report as propaganda paid for by the Division of Capital Asset Management and Maintenance and the Department of Corrections in order to justify a proposed new women’s prison project. The Women & Incarceration Project at Suffolk University, and Prisoner’s Legal Services both published extensive objections to the report.

“It was a see-through attempt to justify a new women’s prison and silence concerns raised by opponents of the new women’s prison project, but it abjectly failed to do that,” said Mallory Hanora, Executive Director of Families for Justice as Healing (FJAH), a Roxbuy-based nonprofit that’s been fighting the proposed new women’s prison the report is connected to for years. “The report was rife with factual and legal errors and distorted research related to trauma and incarceration,” she said.

When the Supreme Court overturned Roe v. Wade in June’s Dobbs v. Jackson Women’s Health Organization decision, the loss of the constitutional right to abortion created a surge of worry for women seeking to exercise their bodily autonomy. Questions arose on Twitter: how many more people will be criminalized and caught up in the correctional web of the state? While Dobbs did expand the carceral state overnight, the incarceration of women has always been a problem that the directly impacted say makes reproductive justice impossible.

“A part of reproductive justice that we don’t talk about enough is how often women are locked up for most of or all of their reproductive life so they don’t even have the opportunity to have children,” said Hanora.

The Ripples Group is a boutique consulting firm founded by former Bain Capital employees that does work for both the private and public sectors, including for opioid-producing pharmaceutical companies. The 88-page document they created for Massachusetts contains both reformist ideas and cautious advice.

For abolitionists, (those who endeavor to end police, prisons and other forms of state-sanctioned violence) the incarceration of women is a dire problem that mainstream feminists have ignored until now. Organizations like FJAH and the National Council have been mobilizing to end the incarceration of women and girls since their founding. These organizations oppose the Ripples Report because it relies on what they believe are reformist tweaks and euphemistic language in its roadmap for the “new era” of women’s incarceration.

“We should hold Ripples responsible for recommending the criminalization of women, the dehumanization of women, strip searching women, subjecting women to sexual abuse, seperating women from their children and community, denying women the right to have children, and denying women access to reproductive health care. That’s what it means to recommend a new women’s prison,” said Hanora, suggesting that Ripples’ poorly informed recommendation to build a new prison perpetuates reproductive injustice.

Overall, the report’s recommendations are in line with a national trend that sees prisons and jails masking their ongoing expansion under branding that appears ‘feminist’ or ‘humanitarian.’ Indeed, a proposed new jail in Harlem, NY is coming under fire for marketing itself as a place for healing. The proposed project was lauded by feminist icon Gloria Steinem, and received favorable coverage in the New York Times.

Organizers suggest that Harlem and Massachusetts are being fed a false choice when it comes to the question of women’s incarceration. The two options on the table: keep women in old and unfit facilities (Rikers in NY, and Framingham in MA) or greatly expand the prison industry with the creation of new, expensive, and deceptively branded women’s prisons. Meanwhile, the third option not being allowed into public debate is the one that organizers argue is most humane and cost-effective: close the old facilities and release women through a handful of decarceration-focused policies that already exist. The Ripples Report does not engage with this third option.

Indeed, the report mistakenly wrote that the Primary Caretakers bill, a policy that allows for people with primary caretaking responsibilities to serve time in a community setting instead of a jail, did not pass, when it became law in 2018. Catherine Sevcenko, Senior Counsel to The National Council suggested that this factual error invalidates the recommendations being made by the firm.

“Ripples incorrectly stated that Primary Caretakers was not the law in Massachusetts, which shows its ignorance about existing opportunities to decarcerate mothers. They ignored the expertise and wellbeing of directly affected women and rubber stamped a new prison,” Sevcenko said.

Another section of the report titled ‘Family and Community Integration’ drew heavy scrutiny from advocates for recommending increased investment in “prison nurseries,” or spaces where incarcerated parents can live together with their newborn children. The existence of prison nurseries is not new, and MCI Framingham previously had a prison nursery in 1875 when it was being built. However, women do not have consistent access to adequate healthcare at existing women’s carceral facilities in Massachusetts, and the DOC has almost no oversight when it comes to delivering on such services. In July, WGBH reported on extensive sexual assault and harrasment of incarcerated women by staff at correctional facilities across the state. In light of all this, the Ripples report’s suggestion that a DOC with this track record should then expand to offer more healthcare services like those required in a nursery setting feels ignorant of the reality on the ground, as described by currently and formerly incarcerated women.

“We do know that after the state passed the law forbidding shackling of women during labor and delivery, it continued, so there’s not a track on those things,” said Susan Sered, professor and chair of the Department of Sociology and criminal justice at Suffolk University. Sered was the lead author on a critical response to the Ripples report, and as an academic researcher, her concerns lingered on the fact that there’s no substantial data on the DOC’s ability to achieve its purported goals.

“They don’t do much outcomes research. We were actually hoping that the Ripples report would be able to access some kind of information, and there really isn’t. So what we know is anecdotal. The Ripples report seems to think the health care at MCI Framingham is good. But there’s no backup to that claim,” said Sered.

“I am concerned about the ability of a prison to create a calm environment for newborns to successfully transition and to be able to order themselves in their first stages of life, as well as create an environment where birthing parents feel safe enough to relax into that parental role,” said Nussbaum.

Speaking on the intentions of the report, founder and executive direction of the National Council Andrea James said, “If we didn’t understand the violence of the state and the commonwealth’s need to keep jails and prisons alive for women, grandmothers, daughters, sisters, aunts, and wives – we know it now.”

The Ripples Group did not respond to request for comment for this article, nor did they respond publicly to the two public responses criticizing their report.

While the moratorium bill did not become law in 2022, organizers, allies, and directly impacted people will continue on the long road to ending incarceration for women and girls. As they work, they ask the public to refuse to accept the prison industrial complex’s rebrand as feminist, trauma-informed, or gender-responsive.

As Hanora put it, “The formerly incarcerated and directly affected women leading our movement need the storytelling space to lay out what different looks like and invite people into our imagination of what else is possible here in Massachusetts”.