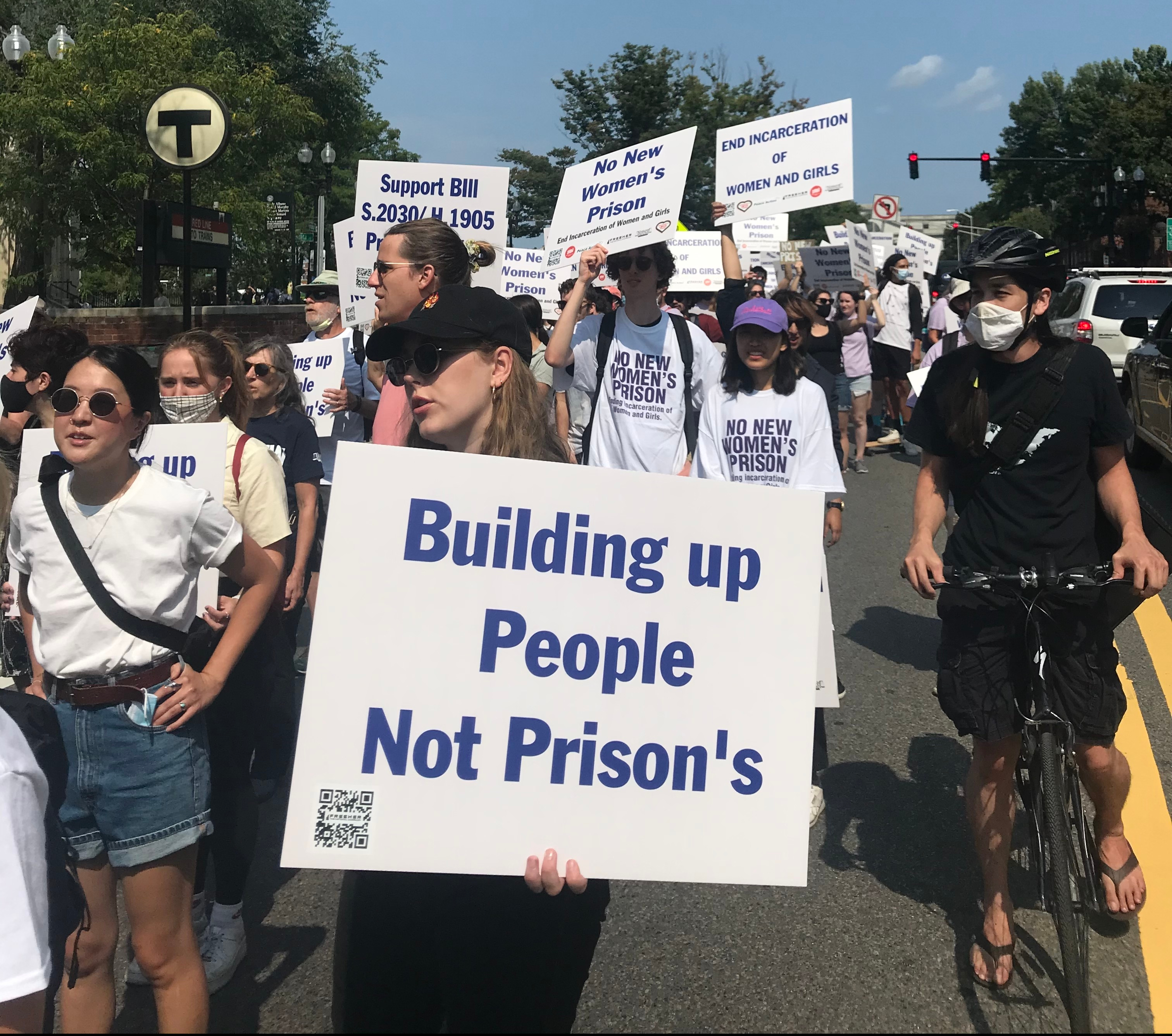 Hundreds of students from across the state sign petitions that point to harms of incarcerating women.

Five Massachusetts college groups have voiced public support for a prison & jail construction moratorium through letters addressed to State Senate leadership. Student groups at Amherst College, Wellesley College, Smith College, Hampshire College, and Mount Holyoke College have all produced letters calling for Rep. Michael Day and Senator Jamie Eldridge and their fellow committee members to support bill S2030: An Act establishing a jail and prison construction moratorium, which is currently in the Senate Ways & Means Committee. That same bill on the house side is labeled H.1905, and is currently in the Judiciary Committee.

Coordinating over Zoom, students at these colleges have come together in support of Boston-based non-profit Families for Justice as Healing, and their collective of volunteers Building up People Not Prisons, who are campaigning across Massachusetts to pass the moratorium bill. Some colleges, like Wellesley, have established abolitionist groups who took on the bill as a new effort on their organizing agenda. At others like Mount Holyoke, collecting letter signatures was led by a handful of concerned individuals.

Makayla Almonte is a sophomore and the president of Wellesley for the Abolition of Militarization and Incarceration (WAMI), one of the groups that’s taken the moratorium on as a key issue. As a high schooler, Almonte was involved in women’s empowerment projects and gun safety through the March for Our Lives. These interests translated well into an abolitionist purview when she reached Wellesley.

Upon joining WAMI, Almonte’s worldview opened, and so did the purview of the group. “We have expanded our mission towards other abolitionist movements such as abolishing ICE, fighting for transformative justice, labor unions, and labor rights,” she said.

The Wellesley letter has 148 signatories, and was hand-delivered to Senate leadership in February. WAMI gathered support for it through Zoom info sessions and campus newsletters. Almonte feels that endorsing the letter is an easy step for anyone to take, and one of WAMI’s larger goals is to involve as many students as possible in abolitionist actions.

“I know especially at my school, people just kind of live in this bubble. And it’s very girlboss and whatnot. So I’ve been popping that bubble, and making sure people are aware that this kind of stuff is happening, and you don’t necessarily have to have these radical views to participate in them,” said Almonte.

Students at Smith College also published a letter in support of the bill. Their document has 195 signatures, 12 of whom are faculty. Across the schools, the letters take similar approaches to connecting the moratorium bill with their institutions. All suggest that building more prisons and jails in the state of Massachusetts runs counter to the values their schools were founded on, things like integrity, diversity, equity, inclusion, and academic freedom.

“Incarcerating women cuts them off from access to community, essential resources, and education,” reads the Wellesley letter. Hampshire College’s letter quotes that school’s mission, Non satis scire, or, “to know is not enough.” They wrote that for students there, knowing about the harms of mass incarceration requires also taking action against them.

Mount Holyoke, Smith, and Wellesley are historic women’s colleges, grounded in the belief that education is one way to build gender parity. Meanwhile, incarcerated women have often been victims of the most violent forms of gender disparity. Most women in the prison system have survived misogynist violence and racialized economic inequality. National organizations like Survived and Punished exist to release people who were sentenced because they defended themselves from a male abuser or attacker. Dedicated philosophically to the ongoing liberation of women, the student activists’ rhetoric suggests that historic women’s institutions might have a responsibility to protest the caging of women.

The moratorium bill was first written by formerly incarcerated Black women in response to an ongoing effort by the MA Department of Corrections to build a $55 million dollar new women’s prison facility in Norfolk on the grounds of the existing Bay State Correctional Center. Nonprofits Families for Justice as Healing and The National Council have fought the proposed build for years, arguing that incarceration rates are steadily going down and that locking up women devastates communities. Activists and formerly incarcerated people also know that ‘if they build it, they will fill it.’ Seen from the activist’s view, the pricey proposed build looks like a last-ditch attempt by the DOC to prop up their outdated industry as alternatives to incarceration gain political ground and overall incarceration rates across Massachusetts continue to drop. Indeed, the ongoing COVID-19 pandemic resulted in decarceration becoming an essential public health strategy for both incarcerated populations and their surrounding communities. Against this backdrop, MA DOC continues to insist against all evidence that a new women’s prison is necessary, and even beneficial to Massachusetts.

[Update: this piece has been updated to better reflect where the House and Senate bills are at in their respective processes.]

Sierra Dickey is a writer, educator, and organizer in Vermont. Read her on Twitter @dierrasickey. Photo courtesy of the author.