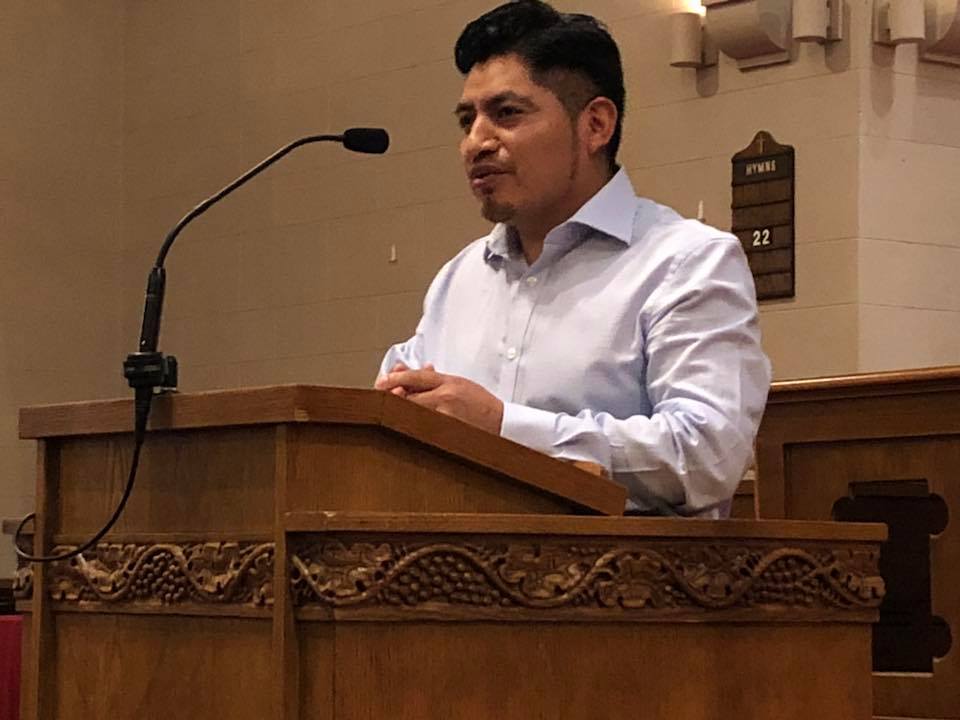 “I’m hoping something will get better for us. We don’t want to be deported, we want to be outside walking freely with our family always by our sides.”

[This piece, originally published February 26th has been updated on March 17th to reflect Perez’s stay of deportation.]

The Biden administration is projecting a progressive stance on immigration all while ICE’s weekly deportation flights increase in number, and CNN reports that 4,200 unaccompanied migrant children are being held in jail-like facilities on the border. In the midst of this political landscape, members of the National Sanctuary Collective have reinvigorated their public campaigns to release immigrant people sheltering from deportation in churches across the U.S..

Up until Saturday, there were two local members of the collective living in churches in Hampshire County. Lucio Perez Ortiz left First Church Amherst for the first time in 3.5 years on Saturday after ICE granted him a stay of deportation. “Oh happy day!” shouted Reverend Vicki Kemper to a large and excited crowd who gathered on Saturday to celebrate Perez-Ortiz’s liberation.

Irida Kakhtiranova remains in sanctuary in the Unitarian Society of Northampton. The Pioneer Valley Workers’ Center (PVWC) has supported both of these two individuals, and is ramping up actions now in cohort with the Collective’s leadership.

“Biden came out strong, talking a lot about pushing for reform and he’s introduced this new bill, but it sounds like there’s already a lot of conversation about watering it way down and making it more piecemeal.” Said Margaret Sawyer, co-director of the PVWC.

Uncertain of what Biden’s policy changes will actually look like, but taking the shift of power as an opportunity to gain some ground, the movement released a number of national calls to action, beginning with an open address to the President-elect on November 9, 2020. Recently, the PVWC and others successfully got Senator Ed Markey to collaborate with Congressman Joaquin Castro of Texas on a “Dear Colleague” letter to President Biden on behalf of those sheltering in Massachusetts and elsewhere.

“I’m hoping something will get better for us. We don’t want to be deported, we want to be outside walking freely with our family always by our sides,” said Lucio Perez Ortiz who, until Saturday,  had been in sanctuary at First Church in Amherst for four years.

Taking sanctuary in religious spaces has been a survival strategy for threatened groups for hundreds of years. Church spaces (and sometimes city municipalities or educational campuses) provide what scholar Elizabeth Allen has called a “bare bones safety,” that gives people time to negotiate for better treatment, avoid further harm, and in many cases just survive.

Felons and political dissidents in medieval England first fled to the church to avoid exile and execution by Kings. In the 1980s, sanctuary became a major strategy of the immigration reform movement as migrants from Central America fled violent conflicts exacerbated by U.S. government intervention.

When Trump began campaigning on anti-immigrant rhetoric and was then elected president in 2016, the sanctuary strategy resurfaced and became necessary once again. Before 2017, Western Massachusetts hadn’t seen frequent or mass deportations, but 10 residents were issued deportation orders in September 2017 during ICE’s “Safe City” operation, in which the agency openly targeted people in cities with immigrant protections on the books, arresting 498 individuals over a three-day period.

Sawyer says that event made sanctuary essential for members of the Western Massachusetts immigrant community. Most of the ten who were arrested that day had no criminal histories and were not previously considered a priority for deportation. Many of them had children who were U.S. citizens, and so they fought the deportation orders.

“And when they got denied, they moved into churches and they became the public face of how terrible the deportations were because their families were separated now that the parent was in the church,” said Sawyer.

Sanctuary leaders argue that their presence over the last four plus years has helped push the national conversation towards meaningful immigration reform. In collaboration with religious organizations, they’ve found a way to refuse to be disappeared by ICE.

“And so now these families are symbols of how deportations hurt families, they’re the frontline activists. You know, they resisted the deportation,” said Sawyer.

Before 2017, Perez Ortiz didn’t plan or expect to be a public face of anything. “Before, I would see things in the news but I never thought that I would be living like I am now just to stay here,” he said.

“I have the right to stay here, but I know a lot of people don’t agree with that,” he added.

Already, members of the National Sanctuary Collective are starting to leave shelter and return to live with their families. At least two people (three now including Lucio Perez Ortiz) involved in the movement across the country have had their deportation orders revoked by ICE. In concert with the many other immigration groups demanding changes from Biden, the National Collective is making the case that their group of sanctuary leaders who have been isolated in religious spaces for years ought to be released immediately.

The sanctuary movement has played a key role in keeping the damage done to families and communities by ICE visible. While the U.S.’s southern border with Mexico is an enduring spectacle of violence against brown families, those in sanctuary remind onlookers that ICE’s practices do damage everywhere.
Perez Ortiz, now free and reunited with his family, has a vision for his life post-sanctuary. “I can walk through a park without fear. I can enjoy moments with my family. I have wanted to start a gardening company for a while now. I love to plant flowers. I did that for more than ten years before entering sanctuary.”

Sierra Dickey is a writer, educator, and organizer in Vermont. Read her on Twitter @dierrasickey.