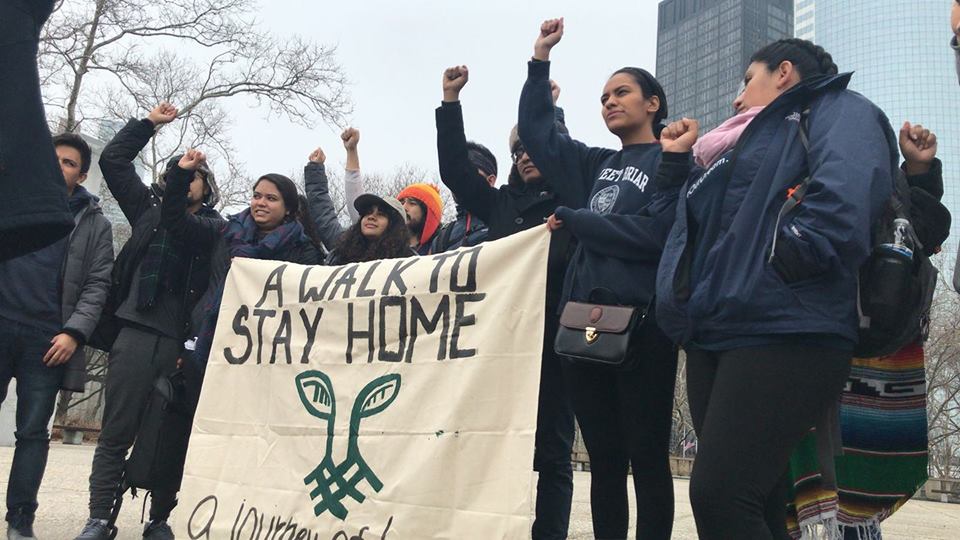 Tuesday afternoon Eduardo Samaniego was scrambling. Eduardo, who is undocumented, needed a coat, a hat, comfortable shoes, a sleeping bag and a haircut. A computer too. By Wednesday evening he would be enroute to New York City, where he would join ten more young people—eight DACA recipients, one who was undocumented, and one ally—to embark on the cleverly titled “Walk to Stay Home.” I met up with Eduardo at the Pioneer Valley Workers’ Center, where he is an organizer, and drove him around to complete last minute errands and conduct an interview.

First we stopped at my house where he borrowed my winter coat, sleeping bag and pad to use on his 250 mile foot journey from New York to Washington D.C.. We traversed the parking lots of Route 9, where we got snacks and funny looking hats. Eduardo and the rest of the marchers, eleven total, are walking to symbolically represent the eleven million undocumented immigrants who live in the United States. They are demanding a clean DREAM Act.

Eduardo came to the United States as a teenager, where he attended high school in Georgia. He watched his classmates receive college acceptance letters to University of Georgia, and decided he wanted to attend too. After completing his application, his guidance counselor told him that his was the most moving application she’d ever seen, but then asked for his social security number. It was in her office where Eduardo first heard the term ‘illegal alien,’ and learned what it meant to be undocumented in the United States. After years feeling “depressed,” working minimum wage jobs saving to go to school, he learned of Hampshire College, that has a scholarship fund for undocumented students, where he now attends.

[/perfectpullquote]The DREAM Act, Eduardo tells me, was first introduced in 2001—seventeen years ago. Despite militant, hard fought efforts to win a pathway to citizenship for Dreamers, who were brought to the U.S. as children, a DREAM Act has yet to be passed. Offers on the table to realize a dirty Dream Act, if you will, seem eager to exchange a pathway to citizenship for an expensive, ineffective, and draconian border wall—or even sell out protections for the parents of Dreamers in the process.

Eduardo suggests that over all these years Dreamers have been played by politicians, whose ambitions have trumped their futures and their lives. “Basically we’re being used as a political tool,” he tells me. “On the right, we fired up the xenophobic and racist voters, and on the left, Democrats have continuously put off passing a DREAM Act even when they controlled the House and the Senate and the presidency in 2010 because it brings out the voters in an election time, Latino voters specifically.” No doubt, such cold political calculus has been a defining feature of the Democratic Party for quite some time. The same logic was used to cast aside the concerns and priorities of much of the democratic base leading up to the 2016 election. Women, poor people, people of color, and immigrants have been been told to just wait till the next election, the Republicans are worse.

An indication of where the mainstream Democratic Party’s headed with immigration can be seen through a congressional race in Texas. One former-Republican-turned-centrist-Democrat congressional candidate, Julian Kopser, who is backed by Washington Democrats, recently compared the Mexican border to the border between Iraq and Iran—which is, of course, ensnared within a war zone. Kopser, for his part, despite his desire for a “clean DREAM Act,” told The Intercept that he’d be willing to compromise with Republicans for increased border security, essentially conceding not only to morally outrageous rhetoric, but also to far-right policy.

As we rolled around Hadley, talking over my ‘91 Volvo’s grumpy engine, we discussed how mainstream Democrats do sometimes roll over with grassroots pressure. It has been movements organized by young immigrants that have gained traction for the Dreamers, not political parties. Eduardo said that “After the biggest defeat of the DREAM Act [in 2010], there was a turning point within the Dreamers’ movement, where we no longer stood by the Democrats—or any other political party, but for ourselves and for our families, and what was right.” After many failed attempts to pass the DREAM Act, and with sustained pressure from Dreamers, President Obama, under whose administration more undocumented immigrants were deported than under any other president in U.S. history, passed DACA (Deferred Action for Childhood Arrivals) through executive action in 2012, allowing would-be Dreamers some status to get jobs, go to school, and have a life in the country they grew up in.

Of course, a DREAM Act would be a huge step forward for those who came here before they turned eighteen, but such a bill still doesn’t consider why people migrate to the United States. You would think that politicians in Washington who passed trade deals, like NAFTA, that robbed Mexican farmers of their livelihoods, or authorized the overthrow of democratic governments in Latin America, wouldn’t be naive enough to pass the DREAM Act, build a wall, and call it day. But like Northampton’s Democratic establishment who thought police operated surveillance cameras would stop crime and ameliorate social ills of the city, those willing to settle for a ‘dirty’ DREAM Act with increased border security aren’t addressing why people migrate in the first place.

I asked Eduardo what justice for immigrants would like like. “There cannot be fair immigration reform if there is no fair foreign policy,” he pointed out. This is a point that is absolutely critical to talking about immigration, but few seem to observe that these “issues are interconnected,” as Eduardo put it. “We should end the belief that somehow we’re better than other countries or that different groups of people are better than other groups of people.” It’s a basic concept that bears repeating. He added that we need to end “our expansionist agenda where we exploit other countries at the expense of their well-being and their livelihoods.” Which, in his words, force them to “seek refuge in other countries and further cause crises across the world.”

[L]ike Northampton’s Democratic establishment who thought police operated surveillance cameras would stop crime and ameliorate social ills of the city, those settling for a ‘dirty’ DREAM Act with increased border security aren’t doing much to address why people migrate in the first place.

“What is fair and what is just is recognizing the humanity in every individual,” Eduardo added; “understanding that migration is natural process that has happened in every generation since there was humans living on this earth, and that borders only contribute to criminalize people, contribute to an unfair justice system, create a different class of citizens. We know that existence without borders is possible, and we see it everywhere.”

It is politicians conforming to a white-supremacist agenda, not public opinion, that is holding back the DREAM Act. Eduardo reminded me that according to “the most recent poll by The Washington Post and ABC, 86% of voters across party lines—Democrats, Republicans, Independents—support a path to citizenship for Dreamers.”

Between the time I interviewed Eduardo on Tuesday and wrote this piece on Friday, another attempt to pass the DREAM Act was scrapped. I asked Eduardo where he’d be doing if he wasn’t organizing. He told me he’d be in a Jacuzzi in Europe somewhere. We both laughed. Unfortunately he can’t do that until he has documentation.

While Washington drags its feet on the DREAM Act, Eduardo, alongside his trip mates, will walk.

Will Meyer is an editor of The Shoestring.