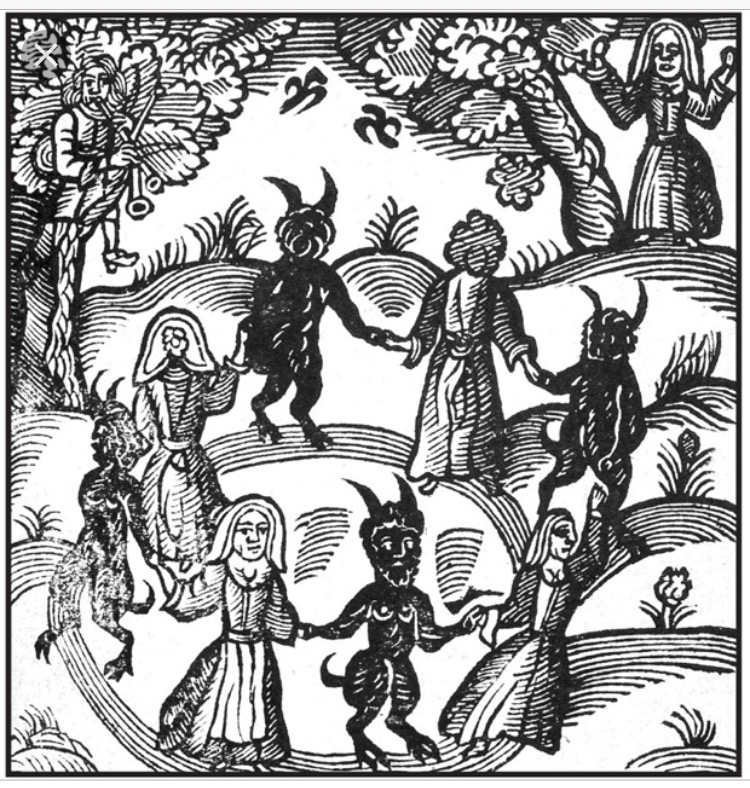 On January 10th, 2018, Donald Trump wrote to the world via Twitter:
“The single greatest Witch Hunt in American history continues. There was no collusion, everybody including the Dems knows there was no collusion, & yet on and on it goes. Russia & the world is laughing at the stupidity they are witnessing. Republicans should finally take control!”

Trump and many of his followers have invoked that the Russia investigation is a “witch hunt” against the president. This rhetoric is full of frightening implications—namely that someone with the power and privilege of our president could be the victim of a witch hunt in its true sense. The appropriation of the term witch hunt by right-wing men is an epidemic, with claims from Joe Arpaio, Josh Mandel, and Milo Yiannopoulos among others indicating that they, too, are blameless victims of “witch hunters.” In most of these cases, these men are facing a feeling of disenfranchisement as a result of political correctness—they feel that acknowledging white privilege is racist, that cultural appropriation does not exist, and that advancements in women’s equality is dangerous for both society as a whole and for the women who advance it. Most important, for these men, political correctness does not add any apparent value to their causes and voices, and seems to only be an obstacle between them and their audience.

As many of us know, the United States has a significant history of actual “witch hunting.” Perhaps most familiar are the 1692 events in Salem, Massachusetts, infamous for a number of reasons that include the persecution and eventual execution of twenty townsfolk, the vast majority of whom were women. Sadly, the hysterical hunt for witches in Salem was hardly an isolated incident. Starting in the fourteenth century in Western Europe, seeking out and murdering so-called witches was a common practice that primarily targeted women of a particular background. The death toll of murdered “witches” from that period is difficult to definitively estimate, but it likely ranged from forty to sixty thousand people. The sociological cause of these events are individual and complex, but were invariably linked to religion, social hierarchies, financial standing, and gender. In seventeenth century New England, whose foundational Puritan values regularly caused women to question even their own religious integrity, suspicion of witchcraft and association with Satan was prevalent. Western Massachusetts alone was home to many accusations of witchcraft, each significant and tragic. However, one of the most fascinating examples of a persecuted witch took place in our very own Hadley, MA.

Mary Reeve was born in England sometime between 1617 and 1624. Her family eventually took residence in Springfield, and in 1690 she married William Webster, another English immigrant. Sylvester Judd’s 1905 History of Hadley tells us that “they became poor and lived many years in a small house in the middle highway into the meadow, and were sometimes aided by the town.” This circumstance was not helped by Mary’s “temper, which was not the most placid, was not improved by poverty and neglect, and she used harsh words when offended. Despised and sometimes ill-treated, she was soured with the world, and rendered spiteful towards some of her neighbors; they began to call her a witch, and to abuse her,” according to Judd. The combined effect of her very low economic status and her less than friendly demeanor was perfect fodder for suspicion of witchcraft. According to local histories, a variety of hardly plausible rumors regarding Mary’s doings began to circulate. One popular tale claimed that she once entered a house and a hen fell down the chimney into a pot of boiling water, which was apparently made inexcusable when a scald appeared on Mary’s body a few days later.

She was officially accused of witchcraft by the county magistrates at Northampton on March 27th, 1683. The record states:

Mary, wife of William Webster of Hadley, being under strong suspicion of having familiarity with the devil, or using witchcraft, and having been in examination before the worshipful Mr. Tilton, and many testimonies brought in against her, or that did seem to centre upon her, relating to such a thing…

She was promptly sent to Boston in April 1683, and spent nearly two months in jail awaiting her trial. As they could not determine without further testimony whether she was guilty, they sent her back to jail to await yet another trail. On September 4, 1683, she was found innocent by the court. She was finally sent back to Hadley to a community of resentful, suspicious neighbors.

Unbelievably, this is where Mary’s misfortunes truly began to erupt. Upon her arrival back home, a beloved member of the community fell ill. Lieutenant Philip Smith, whose father was a founder of Hadley and who was a deacon of the church, came from a family tree that had been significant to the British Crown since the fourteen hundreds—the same line that would go on to give us Sophia Smith of Smith College. Needless to say, the difference in class between Smith and Webster was significant. According to Cotton Mather’s 1702 Magnalia Christi Americana, Webster and Smith had a history:

He was, by his office concerned about relieving the indigenes of a wretched woman in the town; who being dissatisfied at some of his just cares about her, expressed herself unto him in such a manner, that he declared himself thenceforward apprehensive of receiving mischief at her hands.

Apparently, this conflict was evidence enough to those caring for Smith that Mary Webster was the cause of his declining health. In Puritan New England, with its very limited understanding of disease and medicine, a sudden and visible illness could only be accounted to a punishment from God, or interference by the Devil. In January of 1682, Philip Smith had reached the end of his illness and was taken into his home under the care of community members close to him. Seeing as Smith was such a godly man, those at his deathbed immediately sought out evidence of witchcraft, which they—apparently—found in abundance. No longer able to excuse Webster, “Some of the young men in the town being out of their wits at the strange calamities thus upon one of their most beloved neighbors, went three or four times to give disturbance,” wrote Mathers. This “disturbance” was dreadful. Mary was dragged from her home by a “number of brisk lads.” They hung her from a tree, and when she was “near dead,” they buried her in the snow.

It comes as no surprise that this despicable attack on Webster yielded no results—Philip Smith was dead by the morning, unaffected by the young men’s “experiment.” Nevertheless, this did not prevent the obviously biased Mathers to state that Smith was “murdered with an hideous witchcraft, that filled all those parts of New England, with astonishment.” As atrocious as it was to further tarnish her innocent name, Mary Webster demonstrated to her spiteful community what might have been the most concrete evidence of her power—she survived the night. In fact, she went on to live eleven more years. Eleven years during which not one more neighbor, no matter how esteemed, had the guts to accuse her of anything notorious.

Mary’s story is one of extreme poetic justice. As soon as her community saw her perform a truly miraculous feat, she was too feared to be called a witch. Such was the way with social hierarchies in New England’s Puritanism—fear and power walked hand in hand. Fear of God, fear of internal “unholy” desire, fear of our neighbors who are different from ourselves… Fear was undoubtedly a governing principle of our first communities. As our nation expanded and developed over time, moving away from the barbaric actions against “witches” in the seventeenth century, some unfortunate qualities of our region’s earliest post-colonial belief system remain. Luckily, life in Western Massachusetts has changed considerably since 1692, but it is imperative that we remember Mary Webster and those who had power during the time of her accusation.

The effects of stories like Mary’s have colored life in our region since its founding, and are evident in today’s politics, but not in the sense of our president’s pathetic cry for sympathy. Despite what Donald Trump has to tweet about, he is far from representing the true meaning of the term “witch hunt,” and is in fact inverting its meaning by claiming that he is a victim of such persecution, thus fundamentally reversing the power dynamic inherent to an actual witch hunt. Frankly, any person who wishes to use that phrase to evoke feelings of sympathy because they are unwilling to change their morally corrupt ideologies is not only perpetuating hateful and dangerous values, but they are additionally disrespecting those who died at the hands of such ideologies and those who continue to suffer by them.

Mary Webster survived, but many did not. The lesson remains: in the face of those who continue to fear, blame, and hate what they do not understand, we all must remember our national and regional histories, and show that we will never repeat the mistakes of those who were here before us.

If you appreciate The Shoestring, please support us on Patreon!