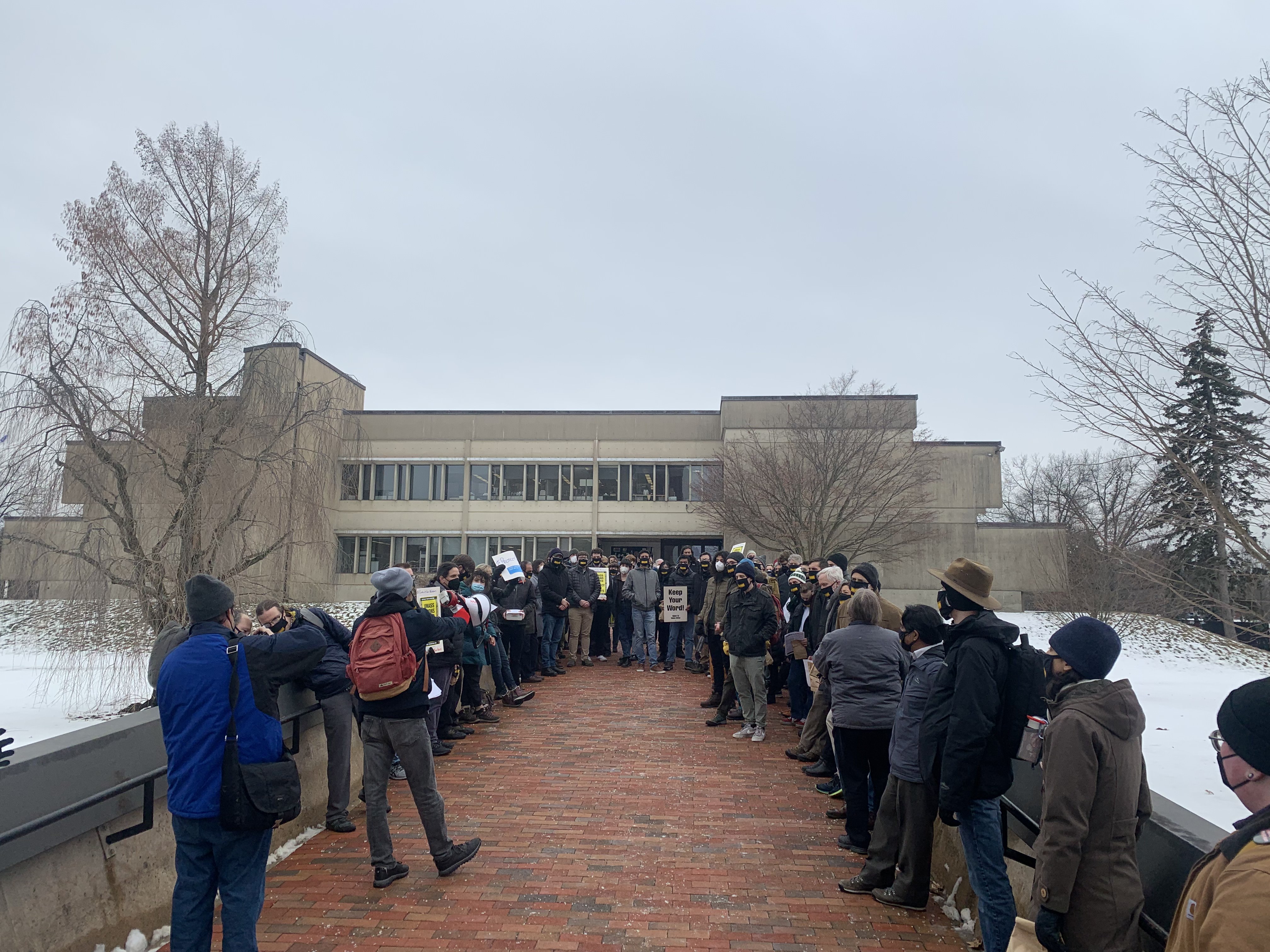 After years of fighting for a fair contract for unionized employees at UMass Amherst, organizers said Groundhog Day felt like a particularly appropriate day to protest. For Ian Rhodewalt, a sober comparison to a comical film sums up the frustration unions on campus feel.

“It feels like the movie ‘Groundhog Day,’” said Rhodewalt, a member of the Graduate Employees Organization, referencing the film starring Bill Murray in which he relives the same day over and over. “Just like last year, we’re still trying to keep our members safe, we’re still demanding flexible work and we’re still demanding respect and a living wage.”

About 100 members of UMass Unions United—a coalition of labor unions representing thousands of faculty, staff, student and post-grad employees—marched across the Amherst campus Wednesday afternoon, demanding a fair contract to remedy inadequate working conditions that protestors say have persisted throughout the pandemic.

Since union contracts expired in July 2020, members have been negotiating new terms with the university. The unions are currently operating on contracts that were ratified in 2017—which have no mention of COVID health and safety protocols.

During the demonstration, leaders from UMass Unions United outlined four main demands to the university:

Outside the Student Union, Brad Turner passed out brown paper bags containing masks that read “UMass Unions United for a Healthy Workplace.” Although the issues have been persistent at UMass for years, Turner, the co-chair of the Professional Staff Union, said the pandemic has exacerbated existing problems.

“We’ve always tried to focus on having a healthy, sustainable workplace, but COVID obviously made things more difficult,” said Turner, who works in the Information Technology department. “It made these issues more urgent, which is why we’re out here to try to call attention to these things.”

Along with the Professional Staff Union and Graduate Employees Union, the coalition includes the University Staff Association, Massachusetts Society of Professors, Resident Assistant and Peer Mentor Union and AFSCME 1776. The police union is not included.

Since the pandemic began, inflation has caused workers to struggle to make ends meet, organizers said. The unions are advocating for wage raises to cover living costs, as well as hazard pay for those who worked on campus during the worst of the pandemic.

University officials are hopeful that the school and unions will reach an agreement soon.

“UMass Amherst continues to bargain in good faith with the unions representing our employees,” said Ed Blaguszewski, a university spokesperson, in a statement to The Shoestring. “While negotiations continue, terms of the previous contract agreements continue to remain in place.”

But organizers expressed frustration at the slow-moving process.

“The ironic thing is that almost as soon as we ratify this contract, we will need to prepare for negotiations for the 2023 contract,” Rhodewalt said.

In the past couple years, the labor coalition and university have been at odds on a number of issues. In March, protestors fought back after nearly 1,000 union members were either placed on furlough or saw their hours reduced, according to the Amherst Bulletin. In September 2020, unions successfully fought the university’s threat to lay off about 450 workers.

However, current contracts and state law stipulate restrictions against more drastic action for the organizers.. No-strike clauses in the contracts prohibit union members from striking, and even without the clause, members wouldn’t be able to strike because of labor laws for public employees.

Many of UMass’ employees are working the equivalent of two jobs, union members say, because of people leaving their jobs, whether it be voluntary or involuntary. On top of extra tasks, some unionized employees have also been denied benefits that higher-level professional staff have been granted.

For instance, clerical and technical workers—who are often lower-level, frontline workers—receive fewer days of paid sick leave and less vacation time than professional staff on campus. In 2020, 96 members of the University Staff Association opted for early retirement because of low morale and inadequate benefits, according to Leslie Marsland, the union’s president.

“If they get the flu and we get the flu, are they sicker than us?” said Marsland, who oversees about 900 clerical and technical workers in the union. “Why do they get more sick time?”

In her more than two decades at UMass, Marsland has never seen such low morale due to the university “not even meeting us halfway” on contract negotiations. She explained while marching with the crowd near the Campus Center that there’s an “unprecedented” number of job openings because people have left their jobs, because they “aren’t getting upgrades they deserve” after years of waiting.

“There were Issues before, but [the university is] just blaming everything on the pandemic,” Marsland said. Though school officials often blame the lack of staffing on financial struggles, she believes “they’ve got plenty of money.”

For clerical and technical workers, Linda Hillenbrand, who has worked at UMass for 29 years and served as the vice president of the University Staff Association, has a simple explanation for the plight they face:

The unions’ efforts also include creating a safe community at the university in general. Students have been vocal in recent months about persistent racism and anti-semitism, inaction around sexual assault, and refusal to address inaccessbility on campus. These incidents often go unaddressed aside from an email from university officials to address the topic, perpetrators are rarely punished and inaccessibility remains a pressing issue for many.

An investigation is still underway months after a racist and threatening email was sent to Black students in September—and that’s just one of 56 recorded incidents of bias in the last two years. Protests against fraternities on campus for sexual assault made national headlines in the fall, with students saying that the school refuses to hold perpetrators accountable. More than 5,300 people have signed a petition to make campus more accessible to students with disabilities.

At the protest’s final stop outside the Whitmore Administration Building where university officials offices are located, union leaders chanted through a megaphone aimed at the building. A delegation of members brought masks into the building, underscoring the coalition’s plea for health and safety protocols to be enacted.

“Students, staff, faculty, unite in solidarity,” protestors chanted while standing on the ramp leading up to the building, standing shoulder-to-shoulder and waving signs.

“The fight doesn’t stop here today,” Turner said. “We’re planning more of this. We need everyone involved in order to show our collective power.”